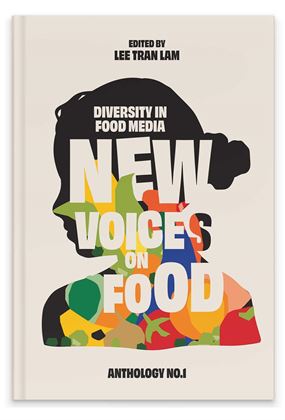 On at the same time

NEW VOICES ON FOOD:
Celebrating the diverse stories that flavour Austrlaila's food landscape
Published by Somekind Press in 2020, New Voices On Food is a very different book on food, which features a curated selection of works by emerging writers from under-represented backgrounds. From personal essays to comics and sketches, this book edited by Lee Tran Lam speaks about a subject that is very close to our hearts (and stomachs) with stories that illustrate the importance of food in Australia’s multicultural society.

This intimate conversation between Lee Tran Lam and the Sydney-based contributors of this new anthology promises to add new flavours to your understanding of food writing and the possibilities of bringing new perspectives to the table.

Lee Tran Lam is a Sydney-based food writer and journalist, who has been in the industry for over 17 years. She has written for publications including Gourmet Traveller, Rolling Stone, The Big Issue, Time Out Sydney, Sydney Morning Herald and SBS Food, and is the host of the popular Local Fidelity program on FBi Radio. She is the creator and producer of the much-loved blog and podcast, The Unbearable Lightness of Being Hungry and is also one of the founders of the Diversity in Food Media initiative.

Originally from Raleigh North Carolina USA, Tyree Barnette is a member of Sweatshop, a literary movement based in Western Sydney. His work features in Sweatshop’s upcoming Racism collection (out 2021) and SBS Voices. He is the co-owner of Southern Soul Sydney, a vegan Southern and soul food pop up. For Tyree, soul food runs deeper than flavour. It is a means of reclaiming the African American identity, culture and its survival.

Read more about Tyree's philosophy in this interview with The Pin

Lina Jebeile is a former high school teacher but now works as a content creator and food photographer in Sydney. She is an advocate for the food of her Lebanese heritage and is the creative force behind The Lebanese Plate, and Spread Hummus Not Hate. She has a passion for recreating childhood recipes and using food as a conversation starter. She has also been featured on SBS Food, ABC Radio and The Middle East Eye. To Lina, food is a powerful asset that is used to promote love and acceptance for Arabic culture in Australia.

ARABELLA DOUGLAS
Arabella Douglas is a Minyungbal woman from Fingal Head on the Tweed Coast of NSW. She is from one of the largest traditional-owner families within the Yugembeh Bundjalung nation. She’s the principal strategist for Currie Country, a traditional owner cousin consortium that offers cultural immersion experiences and connects people with the region’s Indigenous roots. Currie Country cultivates native greens with Pocket Herbs and has collaborated with acclaimed chefs such as Ben Devlin, Josh Lewis and Christine Manfield.
DATES & TIMES Saturday 1 May at 11am
DURATION  60 min (no interval)

CAPACITY 40 with current COVID restrictions
(this is subject to change)
Wishlist Calendar Twitter Facebook
May
Sat May 1
11:00 AM

Please note the T2 Airport line is different from the T2 Inner West/South - if coming from City Circle via airport, please change at Glenfield.

CAR AND BICYCLE
● From Parramatta or Campbelltown way (without tolls)
Take the Hume Highway going towards Liverpool. Follow it all the way into Terminus Street, Liverpool and turn right into Pirie Street. Follow the signs to the Casula Powerhouse Arts Centre, Shepard Street Entrance.
● From the M5/City (with tolls)
Take the M5 to Liverpool. Exit at Moorebank Avenue and drive towards Liverpool turning left at Newbridge Road. Turn left into Speed Street and follow the signs to Casula Powerhouse Arts Centre.