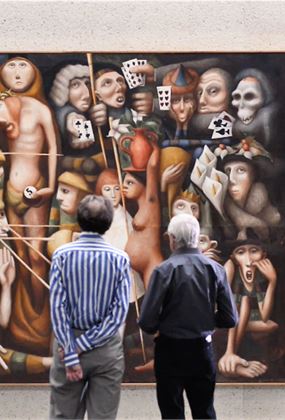 Today his name and works are rarely seen.

Perhaps a habit of drawing colonialism, painting non-conformists and speaking up made Looby persona non grata? With sumptuous cinematography, candid interviews and a striking original score, LOOBY uncovers the life and work of an artist we need to remember.

Following rave reviews at the 2019 Melbourne Documentary Film Festival and its Sydney premiere at the National Art School in February 2020, Looby is screening across Australia from October 2020 throughout 2021. The tour coincides with 100 years of the Archibald Prize – Australia’s best-known art award (Keith Looby won in 1984). Born in Sydney, Looby entered the National Art School at age 15 and graduated with an unmistakeable style that went on to win the Sulman, Blake and Archibald prizes. The latter with Max Gillies as Bob Hawke (above). Looby’s works are owned by all major public galleries in Australia as well as New York’s Museum of Modern Art (MOMA).
Looby’s insistence on painting controversial figures – from communist Rupert Lockwood to feminist Anne Summers (left) – won him few friends in power. Likewise, his illustrations on the horrors of colonialism – Black and White History of Australia – remain confronting today. As the indigenous artist and frequent Archibald finalist Blak Douglas remarks, “In the sixties, when these were created, it was an incredibly gallant thing to be portraying this kind of imagery – because it wasn’t far off the referendum!” LOOBY’s original score complements the mercurial moods of the man, while calm cinematography invites viewers to luxuriate in the striking figures and expansive scale of his work. With an ostracised artist at its centre, LOOBY lets us all appreciate what establishment tastemakers no longer can.

What the critics said at the Melbourne Documentary Film Festival:
Andrew Peirce: "This right here is my pick of the fest. Do not miss Looby. "